The US-169 bridge over Nine Mile Creek in Hopkins, Minnetonka, and Edina was replaced with a causeway. Construction took place in 2017. The project reconstructed more than six miles of pavement along US-169 between TH-55 and TH-62, constructed acceleration and deceleration lanes on US-169 at Cedar Lake Rd, and removed access to and from southbound US-169 at 16th St in St. Louis Park. The Nine Mile Creek causeway was built at a sufficient width to accommodate future expansion needs such as a third lane in each direction and bus shoulders.

A Reduced Conflict U-Turn (RCUT) Intersection was completed at this location in 2015. The project was constructed to improve safety and manage access for proposed economic development. This project is a cost-effective solution for the near-term in place of a higher-cost interchange solution. With RCUT design, left turning movements onto the mainline are performed with a right turn, followed by a U-turn to the desired travel direction. This eliminates the need to find gaps in both directions to make the left turn, particularly important for trucks too large to use the center median area as a refuge. The project also closed or combined multiple access points, safely facilitates traffic movements, serves heavy truck traffic volumes, and has allowed industrial development to begin.

In 2004, MnDOT completed an interchange at the intersection of US-169 and TH-19 to replace an at-grade intersection that had been the site of many crashes. The rural interchange serves southwestern Minnesota by eliminating conflicts for US-169 motorists and provides ease of access for TH-19 travelers. Work on the project consisted of excavation, drainage and bridge construction. The new design improves safety by removing the existing at-grade intersection of two state highways and replacing it with a free-flowing folded-diamond interchange.

In 2010, the City, County and MnDOT evaluated grade separation options and determined an overpass located south of CSAH-3 location as the preferred alternative. Construction of the overpass, completed in 2016, improves community connectivity and allows access to developing land in the community. The grade separation at CSAH-3 improves safety and streamlines connections across US-169. 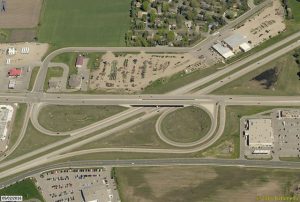 Construction of this interchange was completed in 2007. It improved safety by removing three at-grade access points and a signal. The project also included completion of a frontage road that facilitates access to local businesses. The third leg of the project included completion of CSAH-5, which provides the residential area of Belle Plaine with access to the interchange. 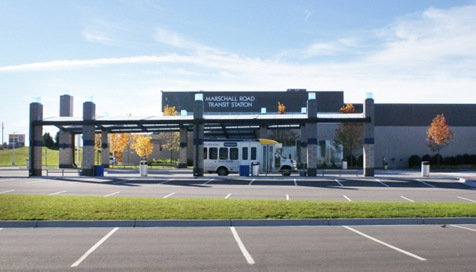 The transit and park and ride station located on the southwest corner of US-169 and CSAH-17 opened in 2014. Marschall Road Transit Station serves as the transit hub for Scott County and consists of 400 park and ride parking spots for commuter bus service users. The station offers an indoor waiting area with restrooms and drinking fountains. MVTA, SmartLink Mobility, and Land to Air operate transit service at the location.

Construction of this interchange was completed in 2004. The project removed the at-grade signal at this intersection location. These interchanges allow greater community connections and access to parks and local businesses, without having to use the US-169 corridor.

Construction of this interchange was completed in 2005. The project removed the at-grade signal at this intersection location. These interchanges allow greater community connections and access to parks and local businesses, without having to use the US-169 corridor.

The completion of this interchange in 2012 addressed one of the most significant bottlenecks in the southwest metro. It was the last project needed to complete the US-169 regional freeway system in the Metro area. Relieving congestion through the removal of signals at this intersection encourages commuters to stay on major arterials rather than using local streets.